Strategic and critical rare metals: what exactly are they? Though they’ve been talked about for quite a few years, most of us have a rather vague notion of what strategic and critical rare metals and rare earths actually are. Some of these concepts relate to geology, while others have an economic dimension. This makes them difficult to consider like-for-like. Here are some key points(1) for each.

Rare metals are metals having a low average abundance and/or availability in the Earth’s crust (i.e. the capacity to concentrate in deposits). This is the case, for example, for indium, cobalt and antimony. Rare earths comprise a group of fifteen metals (the lanthanides) which form an integral part of the earth’s rare metals. They are commonly associated with yttrium and scandium. Their unique properties (lightness, strength, energy storage, thermal resistance, magnetic and optical properties, etc.) make them the elements of choice in a range of technology fields, ranging from defence to digital and energy transition sectors (e.g. permanent magnets, batteries, catalytic systems, etc.). Despite their name, the rare earths are not in fact that rare. However, their deposits – in other words, naturally-occurring concentrations that are economically exploitable – are typically not found in abundance(2).

A metal is strategic if it is essential to a State’s economic policy (security, defence, energy policy, etc.). A metal may also be considered strategic for a particular company or industry (e.g. aerospace, defence, automotive, electronics & ICT, renewable energies, nuclear, etc.).

A metal is deemed critical if difficulties with the metal’s supply could have negative industrial or economic impacts. In most international studies the criticality of a metal (as of any mineral) is judged on two criteria: supply-side risk (geological, technical, geographical, economic, geopolitical), and economic importance which reflects the vulnerability of the economy to potential shortage or supply interruption creating a surge in prices. According to Raphaël Danino-Perraud(3), “In short, critical metals are metals associated with supply chain pressures, in terms of both supply and demand.” For the US National Research Council and the European Commission, a metal or mineral is critical when it is “both essential in use and potentially subject to supply constraints.”

One example: the criticality of copper in the energy transition As part of the ANR’s (French National Research Agency) GENERATE project(4), IFPen and IRIS (French Institute for International and Strategic Relations) have conducted a prospective study on the criticality of copper to the energy and transport sectors. This is designed to assess the impact of the availability of copper in the energy transition, given the significance of copper content in low-carbon technologies compared with conventional technologies. It was found that whatever the scenario considered (two climate scenarios – one at 2ºC and the other at 4ºC – and two mobility scenarios), copper production capacity will have to increase considerably. This is obviously not without consequence.

So for example Chile – which is one of the biggest producers but also facing severe water stress – is studying the possibility of using seawater rather than freshwater for its ore concentration operations. While an interesting idea from the perspective of preserving water resources, it is less attractive in terms of environmental impact. This is because it would not only involve transporting seawater to the mine sites – which are often located at high altitude – but would additionally entail desalination of the water, resulting in higher energy consumption and increased brine discharge.

This example illustrates that in addition to the risks to supply of a given raw material, and its economic and technical importance, criticality studies must also consider a third aspect: the impact of the raw material’s production on health and the environment. It makes little sense for energy transition solutions to run counter to protection of the environment.

The most critical raw materials in Europe and France

In 2017 the EU revised its list of critical raw materials, which now includes 27 – nine more than in 2014, when the second revision was published (cf. COM (2017) 490, dated 13.09.2017). According to the BRGM (the French geological survey) the most critical materials in France in 2018 were tungsten, rare earths, antimony, platinoids, cobalt, scandium and rhenium. At the same time, the substances considered the most strategic were tungsten, certain rare earths (praseodymium, neodymium and dysprosium), cobalt, copper, chromium, nickel, molybdenum, titanium, lithium, tantalum, beryllium and certain platinoids (platinum, palladium and rhodium). 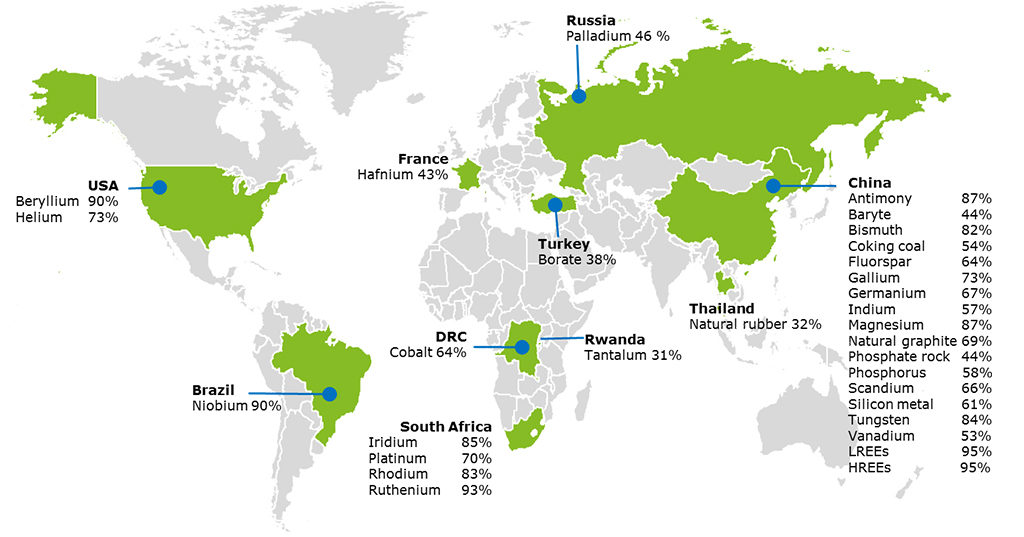 1) Our thanks to the BRGM for its invaluable assistance!

2) For this reason it is difficult to give a number of years of reserves of a particular material, particularly as uses can change radically (currently the case with digital technology, renewable energies and electric vehicles) and substitutes may be found.

3) Raphaël Danino-Perraud, “Faced with the challenge of critical metals, a strategic approach to recycling is essential”, IFRI, December 2018. Note: In a future article, we will return to look at the challenges posed by recycling and the development of industrial capabilities in this field.

4) Launched in January 2018, the two-year GENERATE project (concerning the Geopolitics of renewable energies and prospective analysis of the energy transition) is being led by Emmanuel Hache (IFPen) and Samuel Carcanague (IRIS). The analysis will address cobalt, platinum and certain rare earths, together with cement and water. Learn more at: https://anr.fr/Projet-ANR-17-CE05-0024